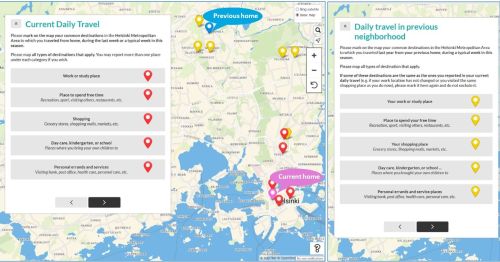 The influence of residential relocation, as a life event, on travel behavior has become the focus of research on determinants of travel behavior in recent years. Although several studies have investigated the influence of changes in the built environment of the residential environment, the complex relationships between the built environment, travel attitudes, and travel behavior has remained controversial. One crucial research gap in this area is the paucity of longitudinal and semi-longitudinal research designs that could capture the influence of changes in the built environment, activity space dispersion, car and bike ownership, latent attitudes towards travel, as well as travel behavior, and the interrelationships between these factors. This study attempts to fill this gap by collecting retrospective travel behavior and attitudinal data in Helsinki Metropolitan Area using an online map-based survey tool (maptionnaire). In total, 1321 residents who had relocated to a new residential location between three to eleven months prior to the survey date participated in the study. The study collected data related to common home-based trips during a typical week in September 2017 and September 2018, stated change in the use of different modes of transport after the move, as well as socio-demographic, and attitudinal data before and after the move.