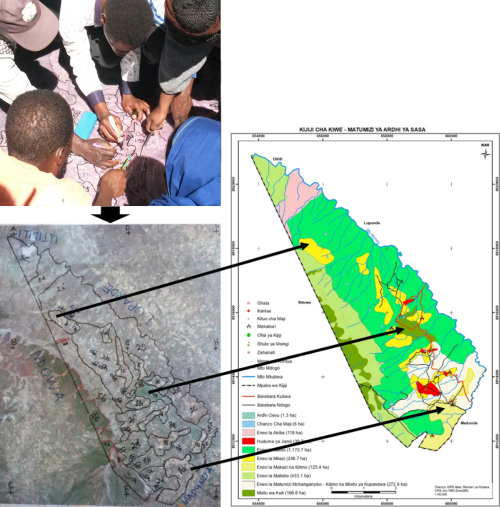 A team of researchers and practitioners from Finland and Tanzania developed a participatory mapping methodology for official village land use plan (VLUP) process in Tanzania during  a four-year research project (SUSLAND 2014-2018). The co-developed methodology attracted the attention of the National Land Use Planning Commission of Tanzania, with which the team published a Practitioner’s manual in 2018. The method has been utilized in the VLUP planning of dozens of villages so far in the country. With the endorsement of the Commission it is being adopted by many more planning practitioners and further developed to suit the various socio-ecological contexts in the vast country.

The VLUPs aim to mitigate land use conflicts and steer land management towards more economically and environmentally sustainable and equitable future for the majority of Tanzanians living in rural areas. Tanzania, however, faces a formidable challenge as it hopes to establish local level land use plans in all of its 12 000+ rural villages. Geospatial data and human scale technologies such as the co-developed participatory mapping method, are needed for the country to reach these goals.

The mapping method utilizes printout high-resolution satellite images (scale 1:7500) as the background for mapping with village representatives during the planning process. The satellite image helps the community to visualize and capture their spatial knowledge in a georeferenced form acceptable by the official planning standards. The community verifies their village boundary and resolves any boundary conflicts with its neighbouring villages using the satellite image of the area. Then they map out their current land uses on the image and use this sketch as a starting point for negotiating future land use delineations with the help of district planning officials. Satellite image has turned out to be an easy medium to work on and it offers the participants also a learning opportunity about their village land from a bird’s eye-view perspective.